Trump's ban on immigrants shows a disrespect for our constitution and an ignorance of modern economic realities.

Let's start with Syria, a country on the banned list. Put aside for a moment the motivation of simple human compassion to help people who've been bombed out of their homes. Among the other reasons to challenge this ban is one ancient and one modern.

First the ancient. Jesus healed people in Syria and Paul preached there, which suggests a connection to a predominantly Christian nation.

Then the modern. Steve Jobs' father came to the US from Homs, Syria. This is what it looks like now. 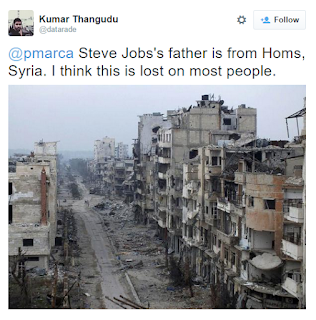 This is what the Apple campus looks like, headquarters to the world's most valuable publicly traded company, a company currently worth nearly $700 billion (about 9X Syria's GDP), a company co-founded and reinvented by Steve Jobs, son of Syrian immigrant. 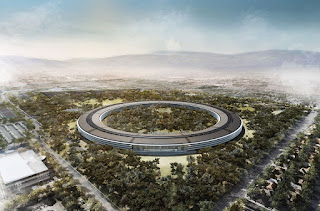 And that brings us to the heart of this argument: modern business is international business. This is bigger than Syria. Immigrants are an integral part of the American economy. Friday I was with a client in Orange County and met with 3 project managers and their core technical teams of four. As so often is the case in those situations, the teams were dominated by immigrants. One team of four had two people from the Middle East (Orange County has a very large Iranian community and they may have been part of that) but each of the three four-person teams had at least two foreign born team members. One team member, Peter, I just thought was American until he spoke in an impeccable British accent. The project managers were all from California but their team members were from China, Philippines, Iran, the UK, and India. Oh, and a couple were from California.

I once sat in a conference room with a technical team making a next generation computer chip for a Fortune 100 company. There were about 12 of us in the room. The conversation at lunch time went to green cards and visas and every single person had a story. (Mine was about my Canadian wife.Theirs was about their own experience of migrating to the US for school or work.)

About a week ago, one of the team leads I had worked with last year at a startup on Google's campus posted something about giving a demonstration of the surgical robot he'd helped to create to Sergei Brin, the co-founder of Google who is now worth nearly $40 billion. He was delighted by that but almost more delighted that Brin had gone to the protest against Trump's ban at the San Francisco airport. Why was he so delighted? He's from Iran. Brin's show of solidarity not only was affirming but raises the probability that as he pursues his career in the US his own parents will be able to come to visit him.

The teams within our leading companies are so intertwined with other countries. Monday of last week, the second person I spoke to at my new client's campus was a man from Iran whose mother is on her deathbed. He had to cancel his trip to see her, losing thousands of dollars in nonrefundable fares and - more poignantly - the chance to see his mother one last time.

What Trump supporters don't realize is that banning travel between countries is - to the modern corporation - as impractical as banning travel between states for American families. Imagine not being able to visit your mother in Oregon because you'd taken a job in and married a fellow from California. It's inane and it's no wonder that leading tech companies like Alphabet (nee Google), Apple, Airbnb, Facebook, Microsoft, Tesla, Intel, Lyft, Netflix, Snap and Uber are among the technology companies that participated" in the legal brief to oppose Trump's ban.

The modern corporation is a multinational institution. It's customers and suppliers come from around the world and even its development teams are scattered across continents.  For American based companies, 10 PM meetings with teams in India are normal, as are 6 AM meetings with teams in Europe. So many of the essential specialists who know how to design a computer circuit or heart valve or nanotechnology scope or the machinery on which such intricate and advanced equipment can be made are rare. It is normal - not unusual - for the technical teams I work with who are creating the next generation product to come from half a dozen different countries. I don't remember a single instance of working with a product development team made up only of Americans but I can remember multiple instances of working with teams who were completely from foreign countries.

What Americans don't realize is that if those team members aren't here, they will still get hired to create next generation products. They will just work in Mumbai or Shanghai or Eindhoven, Netherlands. And when that happens, the restaurants, dry cleaners, carpenters, car repair crew, hundreds of other service people who work with and for them will be in Mumbai, Shanghai and Eindhoven. They won't be here in San Jose or Austin or Boston. The result will be fewer, not more jobs. We're not protecting jobs by barring immigrants; we're shifting them to other places where multi-national teams are free to assemble. The teams of experts will assemble, the only question is where. Given how open we've been here in the US, the natural answer to the question of where best to assemble those teams has been the US. That could change.

It would be enough if Trump's ban was simply unconstitutional. It would be enough if it simply banned immigrants from countries who have never once killed an American on our soil, a policy based on irrational fear. But even if all that doesn't matter - and it should, it should matter greatly - this ban is based on such a wildly naive and ignorant model of how modern corporations actually work, how dependent we are on a vast web of specialists, technologies, and knowledge that respects borders about as much as the flow of air currents. The ban is ignorant. The global economy is a vast, evolving, and interdependent thing that has lifted billions out of poverty and given us a quality of life the description of which generations 100 to 150 ago would find fantastical, nonsensical and about as believable as teams made up of men and women from every continent working together on next generation products. I'm sure that there were elements of Stalin's Five Year plans that were more firmly planted in economic reality than Trump's immigrant ban.

The companies who oppose his ban aren't trying to be cute or politically correct or compassionate. They're simply trying to run a business and when borders become walls that becomes incredibly difficult. Difficult enough that some of our best jobs might just go outside of the US.
Written by Ron Davison