Trump by the Numbers: Stock Market, Deficits and Job Creation

Some numbers on the Trump presidency.

With twenty days left in office, the market has done better under only one other president since Gerald Ford. The average of S&P 500, NASDAQ and the Dow rose 84% under Trump, nearly as high as it did under Clinton (84.5%) and considerably higher than it did under Carter, Reagan, Bush 1 and 2, and Obama. Had you only this data, you'd have to conclude that the market loves a lothario in the Oval Office. Hmm. Well, investment is a form of seduction. 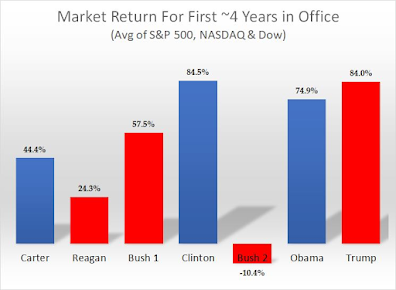 Curiously, while the stock market performed similarly well under Clinton and Trump, deficits moved in opposite directions. Clinton turned a significant deficit into a surplus and Trump turned a significant deficit into a truly numbing number. Clinton inherited a $366 billion deficit and left behind a $157 billion surplus, the last president to leave behind a surplus. By contrast, Trump inherited a $585 billion deficit and is leaving behind a $3.132 TRILLION dollar deficit. Obama inherited a deficit that was nearly 10% of GDP and bequeathed to Trump a deficit of only 3.1%; Trump added a huge tax cut and then pandemic spending to raise that 3% deficit to a stunning 15% of GDP. 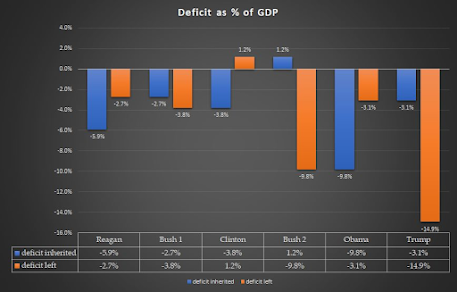 Finally, the jobs market was killed by the pandemic. Before 2020, Trump's jobs numbers were wonderful, his rate of job creation less than that under Obama during his last term but given that the unemployment rate was so low, this made perfect sense: there were simply fewer new people to hire each month. Southeast Asian countries and the EU actually kept employment levels up throughout the pandemic but Trump's throw up your hands and insist that [a. COVID will magically go away, b. COVID isn't a real threat, c. COVID is not his responsibility but instead the responsibility of mayors or whoever, d. he actually won in a landslide] approach to the pandemic meant that the US's death rate and job loss was incredibly high. The result is that Trump becomes the first president since [at least] the 1930s with fewer Americans employed than when he came into office; during his presidency, the economy destroyed an average of 65 thousand jobs per month, about 300 thousand less than it averaged during Clinton's presidency. 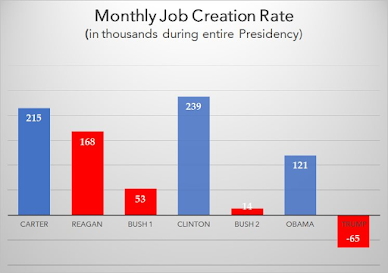 The punchline? During Trump's four years, wealth rose, employment fell and government finances worsened. And for the second time in this young century, Biden will come into office expected to turn the economy around while Republicans impatiently tap their foot, wondering why he's taking so long to repair the mess they left him.
Written by Ron Davison