What if History Has Only Just Begun? Contemplating a Post Economic Society

If you bring together parents of little ones aged 0 to 3, you'll hear them discuss very similar - nearly identical - stages of development. Getting potty trained, sleeping through the night, learning to walk and talk, and learn self control are constants for every child. Those little ones may grow up to become very different people who make their living, pursue romance, create or engage in hobbies, struggle with wild bout of optimism or depression - that is, live their lives in wildly different ways but in the first few years of their life they're dealing with nearly identical issues.

Which brings me to economic development.

We have this tendency to think of ourselves as having reached the pinnacle of evolution. Probably amoeba and early primates had even greater difficulty conceiving of the possibility that evolution hadn't ended now that they'd arrived, but even we tend to think of ourselves as a culmination rather than an intermediate stop. Not just as humans but as a culture or civilization. And yet, we're so obviously still a work in progress, so obviously not yet done.

I think that we've not only entered a fourth economy but that this fourth economy will be less a culmination than a mere phase, perhaps the equivalent of learning to walk or talk. It will transform what is possible but the talking is incidental to the communication, the walking incidental to getting somewhere. In the same way that writing brought humanity into a new phase of history but didn't end history, so will moving beyond scarcity bring us to a new phase but hardly end the continuation of history. And once we've moved beyond scarcity, economics as we've learned it will be less defining than assumed, in the same way that we don't now talk about different communities around the globe having a talking or writing culture.

Having social inventions that allow us overcome the limits of capital or entrepreneurship will be pretty cool. What is even more interesting, though, is the question of what we do when we've overcome all four economic limits. At that point we have the harder but more difficult work of then determining what sorts of societies we want to create. Or, rather, the generations that will come after us will have that work. 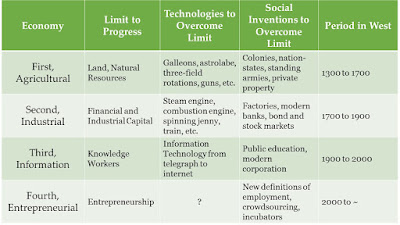