The Most Underrated Inventions of the 20th Century?

In 1870, male labor force participation rate for those 65-75 was 88 percent. Before social security or the popularization of financial tools like pension plans and investment accounts, people essentially had to work until they died.
30% of boys 10 to 15 (and 50% of boys 14 to 15) also worked. And this is a formal count. More would have helped on family farms and not been counted. Kids had to quickly help with family finances. By 1940, this had dropped. Kids were in school instead. 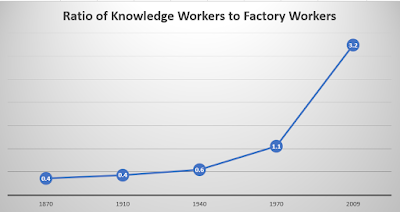 Work changed too. The percentage of the workforce engaged in blue-collar work classified as operators (largely factory workers) and laborers held steady from about 1870 to 1970. Between 1970 and 2009, the percentage was halved to 11.6%. Meanwhile, workers engaged in "non-routine cognitive" work steadily rose from 8% in 1870 to 37.6% in 2009. The ratio of cognitive work to factory work rose from 0.4 to 3.2.

Work that builds up our intelligence rather than breaks down our body is yet another great invention of the 20th century.

Along with all this, the workweek fell from 60 hours to less than 40.

Childhood and work are becoming more interesting and less grueling. We have retirement and two-day weekends. That is at least as cool as automobiles and smart phones. I would say that childhood, weekends, and retirement are the most underrated inventions of the 20th century.