So what does this mean in simple English?
GDP growth was below average. Since 1993, quarterly growth has averaged 2.6%. Hitting 2.1% rather than 2.6% is a difference of $100 billion. ($107 billion, to be exact. Which works out to about $300 per American.)  GDP rose because personal consumption and government spending is up and in spite of the fact that exports and investment are down.

It's dicey to play psychologist based on one quarter but this suggests that the great job market, long boom and easy credit have made American consumers more comfortable buying stuff. So personal consumption is up.

Meanwhile, Trump's constant trade war talk has made businesses nervous about investing more and has already hurt their ability to sell to foreign markets. So business investment and exports are down.

Households are comfortable and businesses are nervous. It's tough to sustain increases in household and government spending when investment and exports are dropping.

There is another element worth noting. I've heard from more than one Trump supporter that GDP growth under Trump has been unprecedented and that he's hit quarterly growth levels that Obama thought impossible. Like so many of the claims originating from the fake president, this is an absurd claim that quickly dissolves on contact with facts. 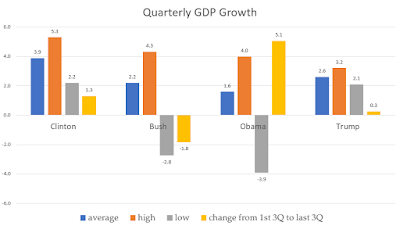 Trump has the lowest high. In his best quarter, GDP grew by 3.2% from a year earlier. For Clinton, Bush, and Obama, the highs were 5.3%, 4.3%, and 4.0%. GDP is not growing at unprecedented highs under Trump. It is not even growing at precedented highs. Clinton, Bush, and Obama all had better quarters. (Clinton alone enjoyed 24 quarters of better GDP growth than Trump's best quarter. 24.)

Of course none of this is what he promised.

Trump promised GDP growth of 4, 5 or 6% after he passed his tax cut. (Video here.) He's currently averaging 2.6%, about two-thirds of what the economy averaged under Clinton and less than half of what he promised. It's not just that his tax bill has doubled the deficit; it has failed to make any discernible change in GDP growth.

If he just shut up, the economy might do better. Businesses might invest more and find it easier to sell abroad without dodging the tariffs of Trump's trade wars. Of course expecting Trump to shut up is like expecting the heads on Mount Rushmore to speak out.

-------------
Catherine Rampell puts the surge in government spending into perspective. 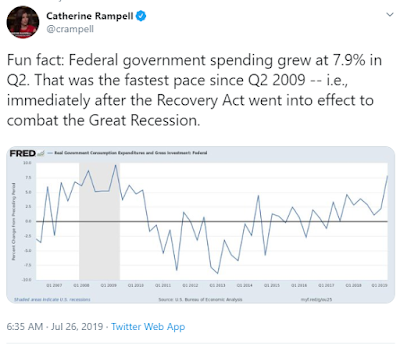