Trump lost the popular vote in 2016. Less talked about is how narrow was his electoral college victory. To put that in perspective, he's the 45th president and 45 presidential elections were decided by a wider electoral college margin. Since his first day in office, his net approval across the 50 states has dropped by an average of 20 points. It is hard to imagine any scenario in which such a drop doesn't reverse his narrow margin of victory into a decisive loss. 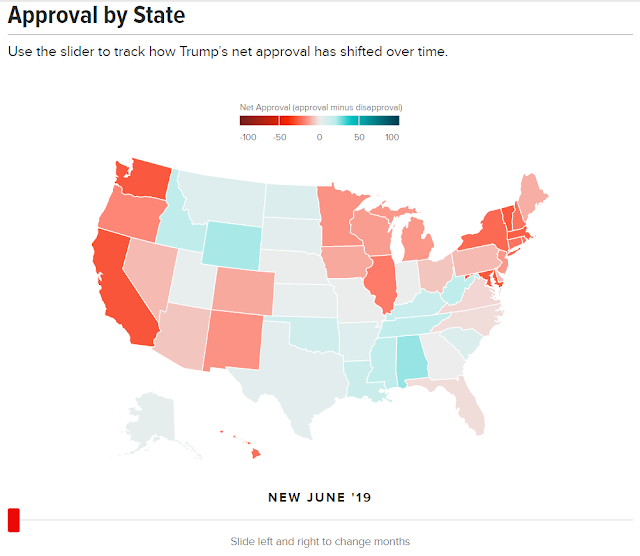 He won 306 electoral votes in 2016, 38 more electoral votes than he needed to become president. That was a tight margin. (To put it in perspective, Trump is the 45th president and there have been 45 presidential elections decided by wider margins.)

I'm no scientist but I can't see how a margin of victory that slim can overcome a drop in approval rating of 20 points.

The states he won that have shifted from a net positive approval to a net negative represent 125 electoral votes. [4]

If all of those states shift from Trump to his opponent, he loses by 354 to 181, a victory roughly equivalent to Obama's 2008 win. If only one-third of the states that no longer approve of Trump vote for his opponent, his opponent wins by the very thin margin that George W. Bush won by in 2000. And obviously if his drop in approval rating doesn't change a single electoral vote, he wins again by a narrow margin. That last scenario is possible but seems wildly improbable.

And of course one thing that makes this even worse for Trump is that every year more of his supporters die. In 2016, 52% of those over 65 voted for him while only 36% of those 18 to 29 did. Every year, about 2.8 million people die and about that many become old enough to vote. Every year, Trump loses about 500,000 voters, net, as younger voters less likely to vote for him replace older voters. He lost the popular vote by 3 million in 2016. Since then, the conveyor belt of aging has meant a net loss of roughly 2 million more voters.

A cautious man would predict a narrow victory for whichever Democrat runs against Trump. These numbers don't make me feel that cautious.