Michael Flynn's personal Twitter account was @GenFlynn . Once he entered politics, Flynn's persona changed dramatically. His feed pushed out messages of hate ("Fear of Muslims is RATIONAL," he fumed in one widely shared tweet), Antisemitism ("Not anymore, Jews. Not anymore," referring to the news media), and one wild conspiracy theory after another. His postings alleged that Obama wasn't just a secret Muslim, but a "jihadi" who "laundered" money for terrorists, that Hillary Clinton was involved with "Sex Crimes w Children," and that if she won the election, she would help erect a one-world government to outlaw Christianity. To wild acclaim from his new Twitter fans, Flynn even posted on #spiritcooking, an online conspiracy theory that claimed Washington, DC, elites regularly gathered at secret dinners to drink human blood and semen. That message got @GenFlynn over 2,800 "likes."
....
Despite the online madness that violated his advice (or perhaps because of it), things seemed to work out well for the general. When Trump won the election, Flynn was named to the position of national security adviser, one of the most powerful jobs in the world. His first tweet in the new role proclaimed, "We are going to win and win and win at everything we do."
The winning didn't last long. 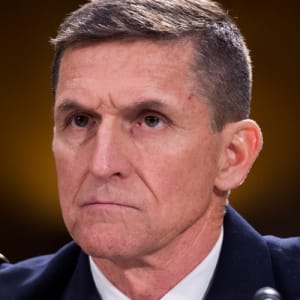 Claims that would have gotten someone checked into a clinic decades ago instead got Flynn appointed to one of the government's most important and sensitive positions. This is how Trump's mind works.

Not enough is made of how susceptible Trump's base is to positively bonkers conspiracy theories. After his election, Donald Trump thanked Alex Jones for his reporting. Among other things, Jones had reported that the government has created tornadoes to kill people, deployed a gay bomb designed to slow population growth, and that Hillary Clinton ran a child sex ring out of a pizza parlor.

More recently, QAnon has captured the imagination of Trump supporters. It, too, feeds a steady stream of conspiracy theories to Trump's base. QAnon's latest test of gullibility? The belief that John F. Kennedy Jr. is not dead and will emerge at the 4th of July celebration in DC to support Trump as his running mate.

Trump lies about 8 times a day. And that rate is accelerating. Not only is this properly understood as mental illness, it is a loud confession that his worldview and policies have little connection with reality. He can't support his policy and actions with facts. He has to make them up. And what happens to people who have a schizophrenic break with reality is that they descend into poverty and squalor. The same thing can happen to a nation. Trump's madness is Shakespearian and future generations will read about his descent into madness the way that past generations have read about King Lear. (But of course Trump would never be heard saying, as Lear did, "I fear I am not in my perfect mind." Further tragedy that.)

Maybe we will look back at this descent into unsubstantiated and irrational conspiracies as a generation's reaction to a world where data doubles every 3 years. Faced with too many facts to process into a coherent theory, the choice between the shrug of the shoulders and the honest answer of, "I don't really know," or the more alluring, "Did you know which evil characters have kept you down ..." a swath of the population has opted for evil conspiracies over benign uncertainty.