Contrasting the Districts that Supported and Opposed Trump: It Comes Down to a Divide Between Industrial vs. Information Economies

The biggest difference is the ratio of folks with Bachelor's degrees or higher to the folks employed in manufacturing. (I still don't know of a simpler proxy for knowledge worker than a Bachelor's degree.)

In the least Trumpian districts, the ratio of folks with college degrees to folks working in manufacturing is 6 to 1. These are districts in the information economy. Not only are they more likely to be knowledge workers than factory workers but they create more jobs. There are 43 jobs for every 100 people living in such districts, 1.5X as many as found in the most Trumpian districts. The information economy is still growing even as the industrial economy shrinks. This not only explains the fact that districts in the information economy have more jobs but likely explains why they're 4 years younger, on average. The regions creating the most jobs are going to attract more people starting their careers.

In the most Trumpian districts, people are 3X more likely to work in manufacturing and household income is $22k lower. These are related. Generally, folks with a degree make about $22k more than folks without one. 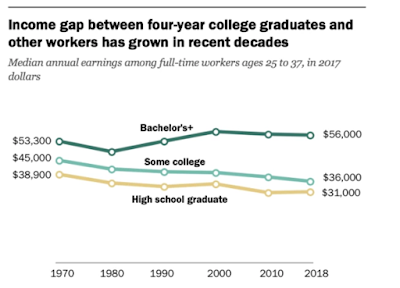