How Hosting or Squelching Science Determines Where Progress Goes Next

In 1642, Galileo died and Newton was born. That's still a poignant symbol of the hand off from Italy to Britain for progress.

Galileo was arguing that the earth rotated around the sun. The church had the authority of Joshua 10:13, a verse that made it clear that it was in fact the sun that orbited the earth. They put Galileo under house arrest and made it clear that developing theories based on observation was not to be tolerated as long as Italy had the church's authority.

Science traveled north. The Protestants of Northern Europe accommodated Galileo's theories and became host to the scientific method that the Italians had helped revive from Greek and Roman time. Newton went further than Galileo, developing a set of laws to explain what Galileo observed. Newton's science and math became a foundation for the Enlightenment and that, in turn, became a foundation for the Industrial Revolution and Democracy. Italy protected its past and the UK created a new future. 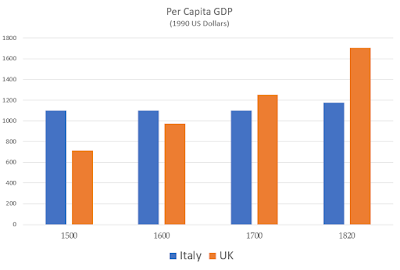 Today, we have a similar inflection point in the transition from fossil fuels to alternative energy. China now leads in the production of wind turbines and solar panels. Meanwhile, we Americans have elected a president intent on protecting coal - an industry that dates back to the time of Newton. Trump - like so many of his supporters - denies climate change in the same way that the Catholic Church denied we orbit around the sun. And science, less interested in the vested interests of coal industry profits or old testament prophets than reality, is shifting away from the greatest home to science since, well, Italy during the Renaissance or the UK during the Enlightenment.

Economic growth and prosperity follows science. It has for centuries. If we continue to deny the reality of climate change and what that means for a shift in strategies and the source of prosperity, we will play the role of Italy in the 1600s. It's not a good role. Shakespeare - born the same year as Galileo - set half his tragedies there.
Written by Ron Davison