It's Time to Stop Pretending That Both Sides are Equal: Trump's Parade is Leading Backwards on Progress

From about 1830 to about 1900, the Democratic party was all madness and defense of the agricultural economy and the Republicans were the progressives. While Democrats were defending slavery, Republicans were figuring out capitalism. Now the Republican Party under Trump has gone full bore mad, fighting for the waning industrial economy the way Democrats once fought for the waning agricultural party. While Trump is fighting trade wars, Democrats are trying to figure out how to finance education and R-n-D for projects like global warming.

This divide between defending an old economy and trying to navigate a new one is why Democratic support is so high everywhere that the economy is strong and Republican support is so strong everywhere the economy is weak. (In the regions with the highest wages, Hillary Clinton won twice as many votes as Trump. (See below for details.)) Communities whose policies support the information economy are more prosperous than those still defending the industrial economy.


One of the many things absurd about this current battle between information and industrial economies is that rather than engage in a really great conversation about policies that better support an information or entrepreneurial economy and how to transition into the latter, we're debating something settled decades ago ... whether we should give preference to policies to support an information or an industrial economy. It is a complete waste of time to defend Trump's 1950s vision of the world and yet that is exactly what you have to do if you're a Republican. It's the political equivalent of selling rotary dial phones. There was no legitimate "both sides are equal" argument in 1870 and there is no both sides are equal argument today.

Progress is heading in a particular direction and that's not the direction Trump is leading his parade.

-----------
The claim that the most prosperous areas voted most strongly against Trump's call to defend the industrial economy is based on facts. Among them is this fact: the 15 counties with the highest average weekly wages voted 2-to-1 for Clinton and against Trump. 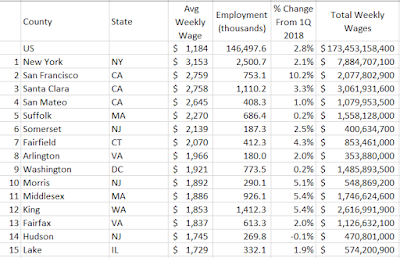 The average vote for Clinton in these regions was 66% . (Details here.)