Right now, Trump seems focused on the stock market. You can see why. The stock market that he has taken as an affirmation of his leadership and wisdom is now in free fall. The Dow did well under Clinton and Obama's presidencies (gaining the equivalent of 15.9% a year and 12.1% a year) and disastrously under George W. Bush's 8 year term (losing the equivalent of 3.5% a year). With this coronavirus rippling through markets, Trump's annual compound returns equates to 1.1%. By another measure, as of 12 March 2020, the market had lost the entire $11.5 trillion it gained since his election. 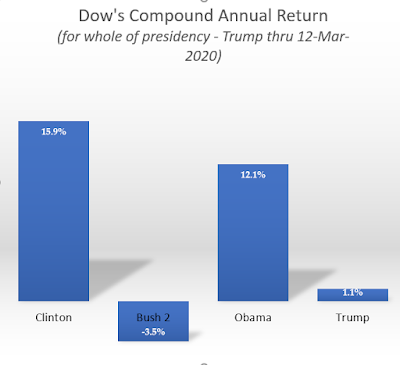 Trump's travel ban and the Fed's attempt to add liquidity and dramatically lower interest rates has done little thus far to slow the fall of markets. Trump's fixation on wealth and disinterest in people and complex problems has caused him to work backwards on the catastrophe before him.


1. The first priority is lives and healthcare. Trump has done little to suggest more lives will be saved by his actions. Test kits have been slow to emerge. Treatment centers are not set up across the country. More will die than need to. He's announced a travel ban from Europe because he's xenophobic, not because it is likely to make much difference at this point. Tests and treatments should be made free and capacity for testing and treatment should be radically increased.

2. The economy is the second priority. People will lose jobs and will need income. Children may be turned away from schools and will need childcare. Businesses like airlines and hotels will suffer severe income loss and will likely layoff workers. Plans need to be in place to keep the economy operating and to keep people financially secure with things like mortgage payments and grocery money, to say nothing of healthcare.

Lives matter more than the economy. The economy matters more than the stock market. And if policy makers work on these issues in that order, they could return things to normal by year end. If they try to rush things and gloss over these real world issues and "fix" the stock market first, they will exacerbate a catastrophe that will include the stock market. The stock market is not the game. It is merely the scoreboard. If you want to change the score, you focus on the field of play. What's on the field are real lives and their medical and economic health. Thus far, the market is not convinced that Trump has a good game plan for those realities and if Trump wants to change the score he has to turn the game around.
Written by Ron Davison