How Pent-Up Savings Could Fuel an Economic Boom in 2021

You look like you could use some good news.

We're poised for a strong recovery next year.

It will get worse before it gets better. Unemployment benefits are unnecessarily running out soon and the most vulnerable will be hurt the most. Hopefully a divided congress can still act to protect these households from unnecessary grief but if not you'll hear me decry the obstinate politicians who think those folks should suffer more.

But there are reasons to feel optimistic about 2021.

One, we could have multiple vaccine options by Spring. This would shift the bottleneck from the supply of vaccine to administering it. (If only one vaccine was approved, supply would be the constraint. If three or five are approved, it is conceivable that the supply of vaccines will ramp up quickly and the logistics of getting people vaccinated becomes the challenge.) April - June of 2021 could look more like 2019 than 2020. 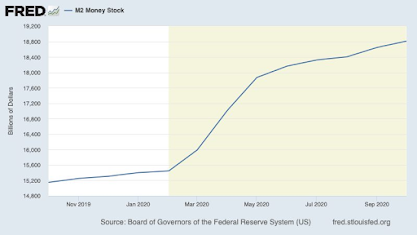 Two, households will have money to spend once things do open up. Paul Krugman shared these graphs showing the surge in savings rates during this pandemic. People generally save about 7%. In April, savings rates spiked up to 33% and at 14% it is still running at about double its normal level. As a result, liquid wealth is up about $3.5 trillion from a year ago, accumulating at about double its normal rate. 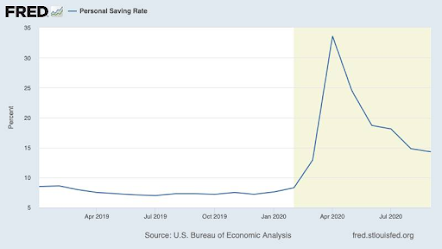 Consumer spending is about 70% of GDP. Given GDP is about $20 trillion a year, even if households spend $1 trillion more of the (by then) $4 trillion in extra liquid wealth they've accumulated, that alone would mean GDP growth of 5%. I don't think there has been a year in recent decades in which so much liquid wealth has so quickly built up.

Households came out of the 2008-9 recession with debt and GDP growth was slow to recover. Post-vaccine 2021 might be more like the recovery after WWII when households were done with war rationing and ready to buy new products. In 1950 and 1951, real GDP growth was 8%. It would be spectacular if our GDP grew at even half that rate. And given the numbers and the situation, that's perfectly conceivable.
Written by Ron Davison