Culture determines whether you tend to play zero-sum games (I have to beat you) or variable sum games (we might both win, both lose, or anything in between).

When land is the basis of wealth, it makes sense to play zero sum games. If I get that oil well, you don't. I'm rich and you're out of luck and if I hadn't beat you, I would be the one out of luck and you'd be rich.
If you're fighting over scarce resources, you're going to have a very different attitude towards "others." They may be here to take what is yours and it is best to protect yourself from them.

Once ideas and innovation become the basis for wealth, though, your attitude towards others changes. That new woman with the slightly odd ideas might have the insight you've been looking for to change the design of your product, or inspire an advertising campaign that could open up new markets. Or that company's app may be the very thing you need to complement your own, allowing you to add a messaging capability to your collaborative design tool, increasing the value of both apps.

What changes culture? Economic progress. A land-based economy will have a very different culture and potential for progress than an economy based on knowledge workers.

One simple way to explain the cultural divide in the US is through attitude towards others - whether those others are immigrants or gay, people of color or atheists. And this attitude very much relates to the stage of economic development.

If you look at the electoral map as it now stands, the country is largely divided. Or so it looks. Why? Maps show acreage and by that measure the two parties have roughly equal shares of the country. 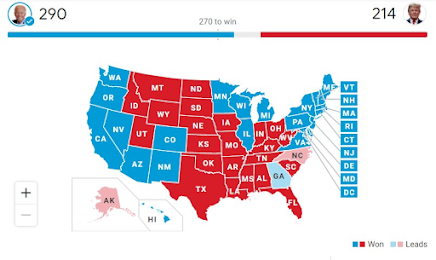 If you look at a map of the country in which counties are sized by GDP rather than acreage, though, a very different picture emerges. The counties that Biden won represent 70% of GDP. [Map from Brookings Institute.] 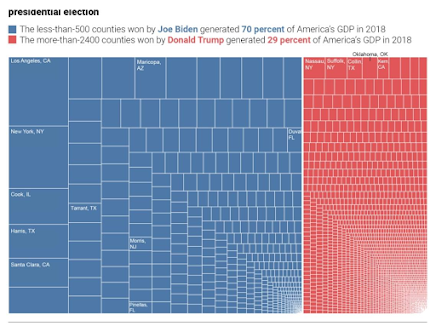 Compared to the whole country, the five counties with the largest GDP (LA, NY (the Manhattan borough), Cook (Chicago), Harris (Houston), and Santa Clara, CA have double the percentage of foreign born, and nearly half the percentage of white non-Hispanic. These are diverse populations that welcome others. This attitude is both cause and effect of why these communities have created so many jobs and so much wealth.

By contrast, the counties that Trump won tend to be rural, their economy based on land. We're not creating any more land and others simply represent a threat to what they already have. The tendency to play zero-sum is more pronounced in these counties because it makes sense of their world.

Trump horrifies people in urban areas because his rejection of science, others and dialogue with others who think and believe differently is an approach that would destroy value in their economy. By contrast, he delights people in rural areas because his willingness to fight and offend and protect them from others is exactly what they need to feel secure in their zero-sum world of limited resources. Trump strikes folks in one economy as destructive and in the other as a protector.

If you give me an acre and I give you an acre, we walk away from the exchange with the same value. If you give me an idea and I give you an idea, we might walk away with more value. If you work with me to create a new product or business, the odds that we both walk away with more value go up even more.
How do you change a culture from zero-sum to variable-sum? How do you create a culture welcoming of others? You shift from a game of who gets more of a limited resource to the game of creating more through innovation and entrepreneurship.
Written by Ron Davison