Current polls indicate that Obama will win about two thirds of the electoral votes. Pundits are talking about a landslide. This is not, historically, a landslide. FDR got 99%, Reagan 98% and Nixon 97% in victories. That is a landslide.

This chart shows how, during the last century going back to the 1908 election, the Republicans have won about 51% of the electoral votes, the Democrats about 47% and third-party candidates almost 2%. As you can see, the close elections that twice gave us George W. are really anomalies.

I've included Obama's latest poll numbers in this graph. You can see how it compares with the results over history. (Click on it to make it larger.) 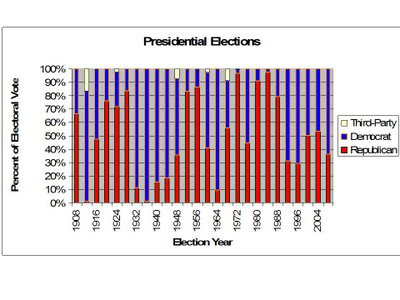 Look at 1960. Although Kennedy won by a comfortable margin of victory in the electoral vote, his margin of victory in the popular vote was only .17% - not even two-tenth of one percent. Historians seem to agree that Kennedy won by voter fraud. Try this thought experiment. What if Nixon had won in 1960, been assassinated in 1963, and Kennedy had served two terms starting in 1969, at age 51? (You can decide whether his second term would have also ended in impeachment (likely for his conduct with an intern rather than breaking and entering into the Watergate apartments). It is hard to think of a better argument against voter fraud than that scenario.

If Nixon had been elected, Blacks would have had to wait eight more years for civil rights. His racist "Southern strategy" that worked so well for him in '68 involved inciting and pandering to segregationist sentiments. I think it's unlikely that he and Kissinger could have navigated through the Cuban missile crisis without somebody getting killed.

If Kennedy hadn't been killed, then Lyndon Johnson would never have been president, and Viet Nam might never have escalated. If Nixon had been assasinated, we'd have had President Spiro Agnew- all the corruption, with half of the charm.

You are right- with just a minor tweak, history could have played out very differently.

Great information in a timely manner. I'm a history buff and I hadn't seen this graph before. Thanks for sharing...

As far as predicting the future goes, it gives me much angst to think that Gore almost won in 2000. Where might we be today? 99% chance America would be a much better place. But, "what-if's" are dust in the wind.

Dust in the wind but so much fun given that hindsight is, after all, twenty/twenty. As for an Obama victory - I'll take it anyway I can get, a landslide or a photo finish.

Did you know that Henry Lodge-Nixon's running mate in 1960-was the father of Veronica Lodge-Archie's girlfriend?

Thomas,
What ifs intrigue me to no end. What is inevitable and what might be different? George W., had he lost in 2000, would probably have gone on to win a Nobel Prize and Oscar. (Wait, no ... things would have likely been different.)

Ben,
good point. I changed it so as to conform with convention. Thank you for not only pointing it out but for doing it in a way that allowed me to pretend it was intentional.

Mike,
Welcome to R World. Good of you to visit.

LH,
elections matter. I think that looking back and doing what-ifs can be entertaining and instructive (and a great opportunity to vent). Of course, if we invented a time machine, we'd just make new mistakes.

Chesca,
So, if Nixon had chosen Betty Cooper's dad instead, we could have Jackie running for first lady during the summer of love? That makes so much sense. (And no, I did not know that. I love the Internet - so much to learn.)