When Teen Pregnancies are Rational

Listening to a program on evolutionary psychology, I heard this fascinating bit about how sexual education might not make much difference to the rate of teenage pregnancies in certain communities for at least two reasons. 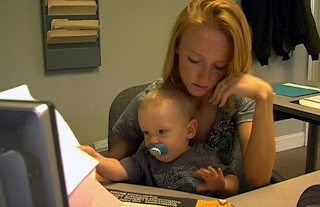 Two, if you are anticipating help from your mother in raising a child rather than your sexual partner, you had better hurry up and have the child while your mother is still young and able.

There is a difference between irrational behavior and behavior for which reasons are not quite as obvious. As it turns out, education doesn't overcome what people know.

Differences in American and British Humor

The brilliant, funny Stephen Fry contrasts the humor of the British and their rambunctious off-spring.

Gallup tracks quite a few variables that define America in this 21st century. I've combined three of them below: the % of Americans who were happy or stressed and the dollars they spent. 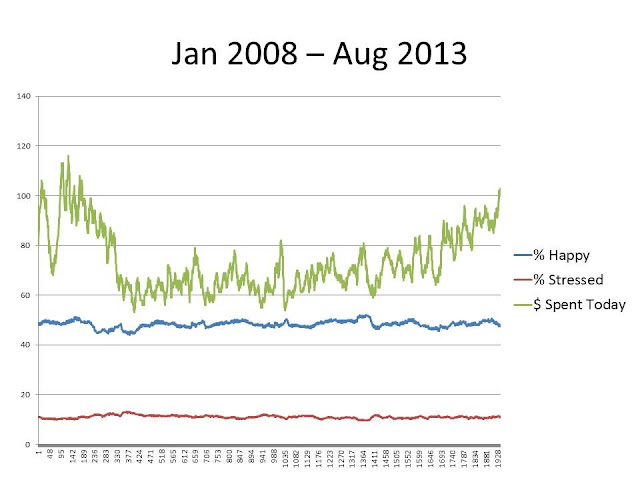 Fortunately, spending is up.Consumption is the biggest driver of GDP, and as Americans spend more, GDP goes up and jobs are created and ... well then everyone is happier. Right?

Curiously, though, happiness and stress levels haven't seemed to move quite as much as spending levels. In fact, they seem to move to their own rhythm. Americans love shopping. It seems that shopping fails to return these affections. America's mood seems unrelated to the amount it spends.

------
Happiness / Stress is "The Gallup-Healthways Well-Being Index tracks daily the percentage of Americans who, reflecting on the day before they were surveyed, say they experienced a lot of happiness and enjoyment without a lot of stress and worry versus the percentage who say they experienced daily worry and stress without a lot of happiness and enjoyment."
Spending is "Gallup tracks daily the average dollar amount Americans report spending or charging on a daily basis, not counting the purchase of a home, motor vehicle, or normal household bills. Respondents are asked to reflect on the day prior to being surveyed and results are presented here in a 14-day rolling average"
Written by Ron Davison No comments:

For the US and most of the West, economic growth during the 20th century was unprecedented. Mind boggling. Per capita incomes rose by nearly 7X in the US in spite of a Great Depression, two world wars, and a period of double-digit inflation. Put another way, if people worked 6 days a week in 1900, they still wouldn't make as much as someone could make by 2000 in a single day. And of course in 1900, people were far more likely to work 6 days a week.

Growth in the West during the 20th century was previously unprecedented, but it has now been surpassed.

Shanghai's rise in per capita income from $920 to $13,000 in just 22 years represents an increase of more than 14X. Double our rate of growth in one-fifth the time. Essentially a child born in 1990 could make more in a month than his parents could at the same age in a year.

There are so many things that various folks could conclude from these facts. For me, it's an affirmation of at least two things: a move towards what we rather imprecisely call capitalism can be a boon to an economy that has previously rejected markets and, central planning and policy can - within the framework of a market economy - make a positive difference.

As companies, products, and economies became more complex, Adam Smith's invisible hand of the market was gradually supplemented by Alfred Chandler's visible hand of management. From Singapore to China, various Asian economies have seemed to understand this better than the West, where modern management first emerged. Planning has a role.

In my opinion, national economies could use more visible hand and corporations could use more invisible hand. Management -the kind that every corporation uses - is a wonderful positive, coordinating the efforts of groups who could not - on their own - succeed at projects that require the inputs of so many different groups and functions. Additionally, self-organizing complexity as we see in a market economy also creates predictably unpredictable outcomes, innovation, and wealth creation.

Dee Hock - the only CEO in history to create an organization (VISA) that exceeded $1 trillion in annual transactions - argues that we've entered a chaordic age in which all good things happen at the boundary of chaos and order. Go for the order of management - of Chandler's visible hand - only and you get something like China in the mid-twentieth century: stagnant, repressive, and oppressive. But go for free-market only - a rules free zone of pure capitalism - and you get robber barons, gross income inequality, and a litany of oppressive by neglect sort of stories. It seems to be at the boundary of markets and planning - in Hock's chaordic region - that phenomenal things happen.

And maybe the real story is one of autonomy supportive policies. Edward Deci wrote Why We Do What We Do in the late 1990s - about the time Shanghai was taking off. Aimed at managers, parents, and teachers, his framework could be valuable for policy makers as well. He argued that there are three models (of parenting, management, and teaching): controlling, abandonment, and autonomy-supportive. Controlling parents do little to create self-sufficiency in their children, dictating actions rather than provoking thought. Abandonment just lets people work through their own learning, find their own way. Finally, autonomy supportive works with the individual to coach them toward the place where they can make their own choices, choices for which they've been prepared by teaching, practice, and sufficient resources. The locus of control is with the student or employee or child, but only after they've been properly prepared to make choices. It is not about dictating what the authority figure wants but instead about enabling someone else to make their own choices with some authority.

Deci's model of autonomy-support could be made to work, it seems to me, not just by managers within corporations but by policy makers within local, state, or federal governments. Asia learned from the West, adopting so much of our market innovations. Given their success, perhaps it's time we learned from them as well. For us, that learning would take the form of two prongs. Our corporations could - like China in the late-twentieth century - open up to allow individuals within them to pursue their own goals, giving up on the controlling model. And our governments could do more to create support for individuals, not just through education but even through planning efforts, trying to create something chaordic.

Everything is Made Up

Everything is made up. Tyrannies and polygamies and capitalism and K-12 education. It’s all made up but of course we quickly forget that and come to believe that "this" (whatever "this" we are living in) is just the way things are.

The problem is, societies and economies develop. They outgrow the solutions the previous generation just made up. Of course when that happens, they may not see, say, democracy that allows only property-owning men to vote as only made up. Instead, they see it as the way things are. The way "we" are, the way we define ourselves. And of course when that happens, change becomes a threat to self and gets resisted. Sometimes violently.

Everything is made up but we forget that. And that’s just one of the reasons that social change is hard.

Also, some changes can be neatly fit into the existing order while others overturn it. Some are "normal" and some are revolutionary.

An Industrial Economy suited to overcoming the limit of capital is very different from an Information Economy suited to overcoming the limit of knowledge work. And the transformation from an Industrial to Information Economy is a big shift. It’s upsetting. And in the end, it reveals that the institutions through which we once defined ourselves are in fact just tools that can be changed. Monarchies can become democracies. Credit carefully guarded by bankers can be given out on plastic cards. But the insight that the institution through which we once defined ourselves is really just a tool is not an insight that is obvious or immediate or even particularly comforting.

You are living through an historic economic change. You may not know that. It’s not obvious that people living during the Dark Ages ever knew they were living in the Dark Ages or even called it that. The Industrial Revolution had been underway for at least decades – arguably a century – before the term “Industrial Revolution” was even used, and even then only by an elite few. It is possible that you’re the first of your friends to hear that we’ve already entered a new economy but eventually all of your friends will know – or perhaps all of their children will know.

And one other thing that everyone’s children and grandchildren will know is that everything is made up. And they will regularly make things up to better realize potential, possibility, and to shape history in the process of exploring what it means to be human. They will not, for instance, accept an institution that grades them on their learning; instead, they'll expect an institution to change to adapt to their learning styles and goals and personal strengths and weaknesses rather than accepting them to change to adapt to what is - allow me to repeat - just a tool for individuals.

Making things up in the domain of social invention will become as normal and as expected as our expectation that companies will make up new model products. And this matter of making things up will not just be referred to technological change. It will increasingly include social invention, creating new ways of learning, new kinds of religion, and regular – and occasionally disruptive – social inventions in the domain of politics, finance, and, of course, business, Just like machinery during the Industrial Economy or information during the Information Economy, social inventions will proliferate as entrepreneurship is popularized. Entrepreneurship, like R&D last century, will become institutionalized. Or would be, if it were possible to institutionalize the very process of regularly transforming institutions.

Everything is made up. Even my claim that there have been three past economies – an Agricultural, an Industrial, and an Information Economy – and that we are living into a Fourth, Entrepreneurial Economy. That is made up but the consequences of focusing on popularizing entrepreneurship are very different from the consequences of popularizing knowledge work. Very different, very challenging but potentially very powerful. Powerful enough to create a new economy.