Why Pete Buttigieg Could Be Our Next President

One simple distinction for leaders is eloquence. Bill Clinton was the best speaker I've heard in politics. Obama created a similar confidence in listeners, exuding intelligence as he calmly explained things. And now we have Pete Buttigieg who is easily the most eloquent of the great candidates in the 2020 field. (He may have been making a dig at his opponents in the debate last night when he said, "As everyone up here has so elegantly [rather than eloquently] said.")

Republicans love to talk about Democrats as socialists but of course that is nonsense (stock markets actually do better under Democrats and have for a century). In truth Democrats nominate moderates who prefer markets to government agencies but are not afraid of government. It is true that Democrats prefer candidates who actually believe in science rather than conspiracy theories and Keynesian policies to unregulated markets but only in the mind of the most excitable Republicans (that is to say, talk radio and Fox TV hosts and their fans) does that make anyone a socialist. 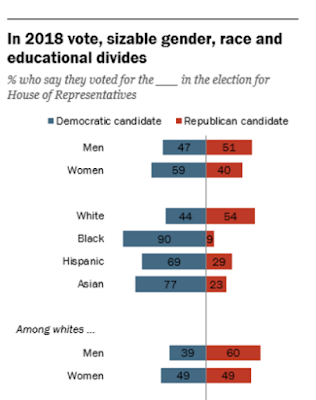 One thing that sets Democrats apart is their insistence on inclusion. It is older white men who vote Republican. Democrats lead in just about every other group - young, minorities, women and - speaking of minorities - the college educated.

51% of men vote Republican and 59% of women vote Democratic. The last Democratic nominee was a woman.

54% of whites vote Republican but 90% of blacks, 69% of Hispanics, and 77% of Asians vote Democratic. The last Democratic president was black.

50% of those over 65 vote Republican. 67 to 58% percent of voters under 44 vote Democratic. Bill Clinton, George W. Bush and Donald Trump were born within 66 days of each other; Bill was sworn in when he was 46 years old, the third youngest president ever. Donald Trump was 70 - the oldest president ever when sworn in for his first term. Like Obama and the Clintons before him, Pete Buttigieg has moderate politics and a distinct identity. He's young. If he won this election he would become the youngest ever president. And he would be the first gay president.

Like Bill Clinton, Barack Obama and Hillary Clinton before, it is not Buttigieg's policies that make him a liberal but instead his identity. (And like Bill Clinton, he was a Rhodes scholar.)

So why might he become President Buttigieg? Because what he shares in common with the two previous Democratic presidents is eloquence, moderate policies with an emphasis on use of reason rather than emotion to solve problems, and an identity as an "other." It may not be a fluke that he won the Iowa caucus.


Graphs from Pew here.
Written by Ron Davison No comments: