The Importance of Remembering the Horrors of War

Trigger warning: This is an account of horror about the close of WWII.

I've come to more often think of history as lifetimes. How far back in history was an event? Well, how old are people today who experienced that? I don't think it is an coincidence, for instance, that Americans became so enamored of the allure of markets as people who had lived through the Great Depression died off. In the 1950s, you could speak favorably of markets to an extent but if you were to say that the invisible hand of the market would correct all society's ills you would be laughed at as if you were talking about your invisible friend. By the 1980s, when the vast majority of people who had experienced the trauma of the Great Depression had died off, someone could rage at taxes and regulation as evils that kept us all from realizing our potential and people would nod along. A society is as defined by its past traumas as much as it is by its past triumphs.

Which brings me to Russia and central Europe's past traumas. In early 1945, Soviet troops began their offensive into Nazi-occupied territory. Here are a couple of excerpts from Anne Applebaum's Iron Curtain. The Poles and Hungarians, for instance, were first delighted to be liberated from the Nazis by Soviet forces but that delight soon changed.

"In part, the Soviet soldiers seemed foreign to Eastern Europeans because they seemed so suspicious of Eastern Europeans, and because they appeared so shocked by the material wealth of Eastern Europe. Since the time of the revolution, Russians had been told of the poverty, unemployment, and misery of capitalism, and about the superiority of their own system. But even upon entering eastern Poland, at that time one of the poorest parts of Europe, they found ordinary peasants who owned several chickens, a couple of cows, and more than one change of clothes. They found small country towns with stone churches, cobbled streets, and people riding bicycles, which were then still unknown in most of Russia. They found farms equipped with solid barns and crops planted in neat rows. These were scenes of abundance by comparison with the desperate poverty, the muddy roads, and the tiny cottages of rural Russia.

"When they conquered Konigsberg churches, Budapest apartments, and Berlin homes filled with antique furniture, "fascist" women living in what they perceived to be unimaginable luxury, the mysteries of flush toilets, and electric gadgets, then they were truly shocked: "Our soldiers have seen the two-storey suburban houses with electricity, gas, bathrooms and beautifully tended gardens. Our people have seen the villas of the rich bourgeois in Berlin, the unbelievable luxury of castles, estates and mansions. And thousands of soldiers repeat these angry questions when they look around them in Germany: 'But why did they come to us? What did they want?'"

This bafflement at German affluence combined with the desire for revenge against the Germans for the atrocities they'd committed in the Soviet Union. The Nazis killed about 26 million Russians during their invasion and occupation. (By comparison, Canada's entire population at this time was about 11 million.) Nearly every soldier had lost someone - a parent, wife, or child or all three - because of the Nazi invasion. One of the many ways their rage was manifest was in rape. Russian soldiers raping women in the areas they were liberating from Nazis was widespread. Applebaum again,

"The Red Army was brutal, it was powerful, and it could not be stopped. Men could not protect women; women could not protect themselves; neither could protect their children or their property. The horror that had been inspired could not openly be discussed, and official responses were usually oblique. In Hungary, the Budapest National Committee suspended the ban on abortions in February 1945, though without explaining exactly why. In January 1946, the Hungarian Social Welfare Minister issued an evasive decree: "As an effect of the front and the chaos following it there were a lot of children born whose families did not want to take care of them ... I ask hereby the bureau of orphanages ... to qualify all babies as abandoned whose date of birth is from nine to eighteen months after the liberation."

A country-wide proclamation that children born during a particular window of time were to be considered, by default, orphans. The trauma of war lasts as long as the lives of people who have experienced it. Most of those adults who experienced WWII are gone now and we now have what may become the largest land war in Europe since WWII. History, particularly horrific history, should be read and remembered, if only to lower the chance that it is relived.
Written by Ron Davison No comments:

I'm intrigued by data but often the more data one gets, the harder it is to make it tell a story. It is easier to draw a line between two points than it is to draw a line through 13.

One weird little graph I created simply shows the sum of first year real GDP growth plus millions of jobs created. (3% real GDP growth plus 2 million jobs created = 5.) You can see that the presidents who did worst by this measure - Eisenhower, Reagan and Obama - handily won reelection. Of the four who did best by this measure, one was assassinated, one was reelected, one lost reelection and one (the one who has easily done best by this measure) is still in office and might conceivably not even run for reelection. In other words, the economy doing poorly in your first year definitely doesn't hurt you and the economy doing well is absolutely no guarantee of any particular political outcome 3 years later.
Anyway, we will likely never again see a year that combines such high rates of real GDP growth and job creation as did last year. The pandemic was a unique economic event and because of (largely) bipartisan support for stimulus the temporary shutdown did not ripple into years of crippling recovery but instead has already largely ended, the economy (for the most part) recovering in record time. It was a year ago today that Congress passed a huge stimulus package and that is a big part of why this recovery has been so strong and rapid.

I still think that the degree to which it changed in 2021's "have you tried turning it off and turning it back on again?" year+ of sharp economic contraction and rapid economic recovery is being glossed over. There is a common misconception that millions of people just lost their jobs and then - months or a year later went back to those same jobs. A lot changed in that time and there was a lot of creating along with the destruction.

Obviously a lot of spending shifted from services (travel and eating out, for instance) to goods and may now shift back again. Less obviously, the economy created a record number of new businesses (venture capital double what it was in any previous year) and the level of quits - and people finding or creating new jobs - also shattered old records. To the extent that this level of creative destruction sustains higher wages, productivity gains and more entrepreneurial creativity, the amazing numbers of 2021 could ripple into the future, leading us into a time in which last year could look like prelude to a golden period of economic progress. If not, last year could just look like the economy quickly rebounding to where it was.

Anyway, here are some numbers for my two blog readers who also find such things interesting. 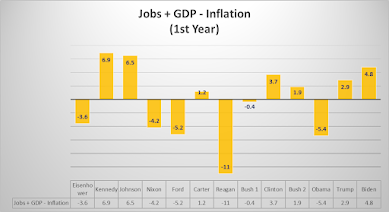 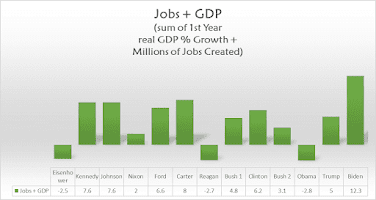 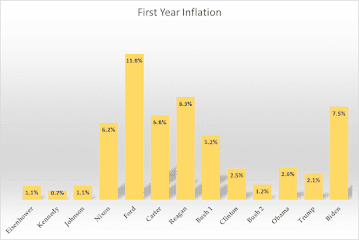