Prices fall when there is a glut. All together, there is more than a quadrillion in money, precious metals, stocks, bonds, and financial derivatives. As the global population grows and - more importantly - the number of people earning enough to save grows - the supply of capital continues to grow. The US alone has more than 10 million millionaires and now has more billionaires than members of congress.

The supply of capital is at an all time record high. That's reason enough that capital's price (interest rates) is low but there is more. The demand for capital is low.

What options do investors have? There is real estate, which continues to rise in major cities. And obviously you can buy bonds - an increasing percentage of which offer a negative interest rate. Or you invest in existing businesses, buying stock. Stock might look like a decent investment compared to bonds, but stocks are priced pretty high already. And companies have enough capital that they are buying back their own stock at record rates. They don't really need your money and don't even know what to do with their own cash. Another option is to fund a startup rather than buy stock in an existing company. You can help to create a business rather than just buy a share of an existing one.

So, what is the demand like for startups? How much capital do they need? Not much. It now takes less capital to start a business and that is one more reason the price of capital has fallen.

The Global Entrepreneurship Monitor (GEM) tracks various entrepreneurial measures around the globe (which I guess is implied by its name). One fascinating tidbit came out of new data they released 8/8/2016. In their 2006 report, entrepreneurs needed an average of $65,000 to get a business off the ground. For the 2015 GEM report, the median was $13,000. Now median is typically lower than average and it is possible that the difference between $65,000 and $13,000 could all be explained by that difference in measure. It's also possible that the capital needs for startups has dropped considerably in the last decade.

To exaggerate the differences, think back to a startup in 1960 when you might be setting up a factory or even a brick and mortar store. That requires a serious outlay of capital. Now think about a startup today. It might be focused on app development. They might need a half dozen laptops for the programmers.

Consider Uber. Its valuation is around $60 billion. It is essentially a taxi service. It has at least a quarter of a million drivers in the US but it didn't have to purchase any of their cars. 10 or 20 years ago, it might have taken $5 billion to create a fleet of 250,000 taxis. Today they are able to "create" a new car simply by having another driver download an app. The capital it took to start Uber is so much less than what it would have taken to create comparable capacity in 1995 or even 2005 before smart phones became ubiquitous. Uber was able to create a lot of wealth but they didn't need a glut of capital to do it.

There are a couple of implications of this.

For roughly the quarter century leading up to the Great Recession, excess reserves bounced around between one to two billion dollars. Excess reserves are money that banks keep rather than loan out. Then starting in September of 2008, excess reserves began to swell. From August to September, they rose from %1.9 billion to $59 billion. In October they hit $267B and then $767B by the end of 2008. In August of 2014 excess reserves peaked at $2.7 trillion, roughly 200X what they’d averaged before the Great Recession.
You have to appreciate the fact that the Federal Reserve was trying to pump capital into the economy. The fact that it did so much more for excess reserves than actual investments suggests that capital wasn’t the limit to progress. (An important caveat here. At the height of the financial crisis in 2008 and early 2009, credit and capital was a limit and it was a beautiful thing to have the Fed intervene with a flood of cheap capital and guarantees. By 2014, though, things were a little different.)
Policy makers continue to act as though capital is what we need more of and we use everything from tax policy to monetary policy to address that apparent scarcity.

The question is no longer, How do we get more capital? We've got a glut. The question is, How do we get more entrepreneurs and make more employees more entrepreneurial? We've got plenty of capital to fund them. So much capital, in fact, that we're putting it into negative interest bonds. That might be a signal that we need to start treating capital differently. This is a post-capitalist market economy and requires a different set of policies.

One reason that markets are great is because of price signals. Things that are cheap you should use a lot of and things that are expensive you should use less of. Capital? Capital is cheap and we should take the market's advice on how to use it. What really is scarce? The entrepreneurial ability to transform that capital into jobs and wealth. That’s the limit that policy should focus on overcoming.

More than once conservative friends have told me that there is no real difference between Trump and Clinton. To test that hypothesis, consider this little thought experiment.

Imagine that a woman who came to fame as a reality TV star was running for president without any previous experience in office. Much of what she says terrifies the experts and reveals layers of ignorance. (What sort of statements? How about something like “[Putin’s] not going into Ukraine, okay? Just so you understand. He’s not going to go into Ukraine, all right? You can mark it down and you can put it down, you can take it anywhere you want.” The sort of statements that would make a former CIA Director warn that she's become an unwitting agent of the Russian Federation.) More than once her emotions have led her to lash out at people in her own party.


Her opponent is a man who has been senator and secretary of state and has worked closely with a president on special projects. His policies have even been endorsed by members of the opposition party.

Tell me that race would be close or that anyone would seriously think the two candidates were just the same.

What if Trump is on the Most Amazing Betting Streak in History?

Couldn't a lot of this casino owner's campaign behavior be explained by a series of drunken double or nothing bets with other billionaires?

Trump: Ok. How about this? I get an argument with the pope about what it means to be a Christian and I go up in the polls.
Cuban (or Bloomberg or some other billionaire who will eventually have to come out against him): No way!
Trump: Double or nothing on the last bet I won when you said I'd be the first of 17 GOP candidates to drop out.
....
Ok. I got another. I say McCain isn't a war hero because he was captured.

....
I insult a gold star family and then remind the nation that I've made comparable sacrifices.

....
I ask the Russians to hack into and then release classified emails from the secretary of state.

....
Instead of kissing a baby on the campaign trail, I order it out of the room.


There may be more than a few billionaires who are already into negative territory from betting against the Donald.

Trump is against free trade, big corporations, and military intervention. He's even contemptuous of the military, both the judgment of generals and the sacrifice of warriors. He questions authority. He revels in moral relativism and shocking language and statements. 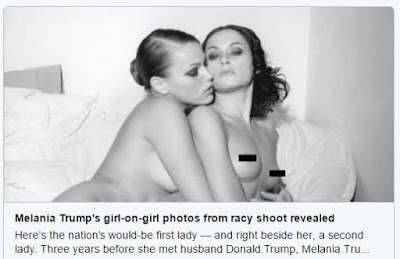 If all of this seems familiar, it's because it is. Today's conservatives are 1960s liberals. Who says the GOP doesn't believe in recycling?