This week Google joined Apple, Microsoft and Amazon in the trillion-dollar valuation club.

Here are some things you may find by googling Google.

Larry Page DOWNLOADED THE INTERNET in 1996 as part of his doctoral work at Stanford.

Larry Page grew up in the Bay Area and his dad was a big Grateful Dead fan, had a weekly radio show about the Dead. When Google could afford it, Larry Page hired a chef who had worked for the Grateful Dead to feed his employees. Every winter they had employee trips up to Squaw Valley and one year, Google employees were coming back to the chef to ask what had been in the ganja goo balls that was making them hallucinate.

3 years ago someone at Google told me they were spending $2 billion a year on employee meals. (Food - the fuel of knowledge workers - is free at Google.) I'm sure that has gone up. I don't think they serve ganja goo balls anymore.

Is the Future Non-Factory Jobs? (One Way to Understand the Jobs Numbers for Manufacturing)

Each month bls.gov releases the new jobs numbers. "The economy created 130,000 jobs last month." The technical title for this jobs number report includes the phrase, "nonfarm." Farming is such an insignificant and volatile portion of the nation's workforce that it is excluded from the official record of new jobs created or destroyed.

Once upon a time, farming was hugely important. Now it is not. We may eventually say something similar about manufacturing jobs.

The other day in the airport, I struck up a conversation with a guy from Wisconsin. He told me that his dad was one of 11 and his mom was one of 4. All 15 of that generation (we're talking about folks who started careers in the 1950s) were dairy farmers. There were 64 cousins in his generation. Of those, only one is a dairy farmer and he's going bankrupt. (This cousin has only hundreds of cows; the dairies that are surviving are big businesses with thousands of cows.) Nobody in that group of cousins is encouraging their children to prepare for life as dairy farmers. 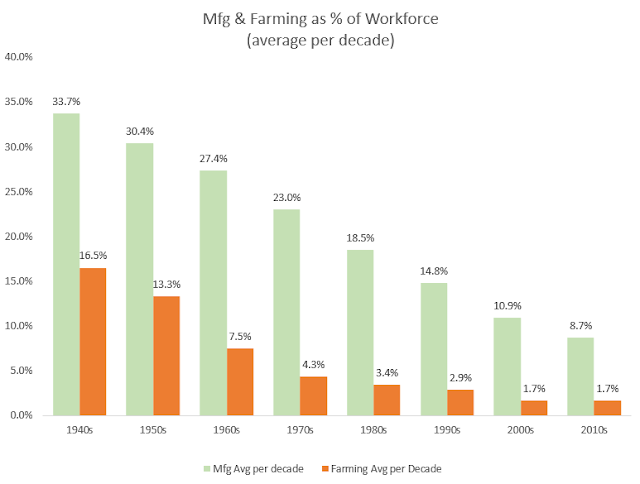 Manufacturing jobs as a percentage of the total workforce are now where farm jobs were in 1963: 8.4%, suggesting that manufacturing is running about 60 years behind farming. Defining factory jobs is harder than defining farming jobs, though. I've seen a note at BLS.gov to the effect that an increasing number of jobs in manufacturing fall into the category of knowledge work. Programmers for the robots and process design experts are among the folks who now fall into the category of manufacturing; a decreasing percentage of the folks in manufacturing are not working on production lines as we classically envision it from pictures of the 1950s. They are as much a part of the information economy as are the programmers and analysts sitting in cubicles for software or service companies.

Of late I've seen an uptick in our consulting for projects that are production line transfers. The vast majority of our work is with companies developing new products. These production line transfers have literally gone from zero percent of what we do to about 10%.  What does it mean to transfer a production line? A factory line in, say, Pennsylvania is being transferred to Monterrey, Mexico. The savings are huge and irresistible and when the transfer is done, the US has fewer manufacturing jobs.

Trump has defined his presidency in large part by two things: radically slowing immigration and bringing back factory jobs. Immigration has dropped under his watch. Initially, factory jobs rose as well but there is a problem with that.

His sudden imposition of tariffs made domestic sources more favorable and seemed to have raised the percentage of jobs created in manufacturing to meet this uptick in demand. The problem is, though, that supply chains are complicated. If I bought cheaper steel from China to manufacture a car, say, a tariff on Chinese goods may cause me to shift over to an American supplier of steel within a month or so. Short-term, that would raise the number of manufacturing jobs. But given that ultimately I need to compete on the global market, this need to pay more for a key input might cause me to make a more dramatic change over the next year; I may shift my entire production line out of the US to where tariffs don't distort input costs and threaten my profit margins. Short-term, the tariffs may raise manufacturing in the US; longer-term, they may drive it out. And that seems to be what is happening. 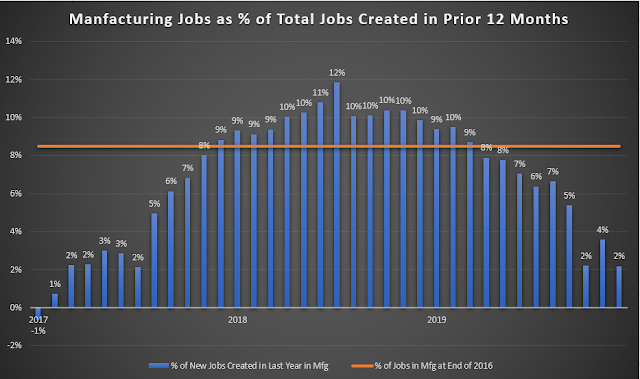 This is not something to celebrate or to mourn. This is simply a fact. Once upon a time we were in an agricultural economy and children grew up expecting to work on farms. Decades later, that expectation shifted from farms to factories. A good society prepares its children for jobs that will keep them employed at good wages, though, and cares less about whether they will work on farms in factories or in cubicles or in the home office than if they are making good wages. A bad society forces traditions on its children and tries to prepare their children for jobs that were suitable for their grandparents but not for them.  It's not an agricultural or industrial economy any longer.

It is true that there are problems with the information economy and some evidence that we're getting diminishing returns from encouraging more children to get college degrees to prepare for work. That said, children are much more likely to grow up to work on a laptop than they are in a factory or on a farm. Promising to bring back factory jobs is like promising to make your skin look younger; it may work for a time but the long-term trend is against you.
Written by Ron Davison No comments:

Why Automating Truck Drivers' Jobs Could be Good News

I've heard and read concern about the millions of truck drivers who could lose their jobs to self-driving trucks.

Here are two reasons why I don't think it's a big deal. It might even be a positive.
1. Every year the American economy destroys nearly 30 million jobs and creates about 28 million. It is a very dynamic economy.
There are currently about 3.5 million truck drivers. Let's assume that they are ALL gone in a decade. (That strikes me as wildly optimistic or pessimistic, depending on your perspective.) All gone in a decade means that every year 350,000 lose their jobs. That sounds like a lot. You know what percentage of jobs destroyed that is? Just over 1%. It's a dynamic economy. We can create new jobs for them. Our economic health is never defined by the number of jobs we destroy; it is defined by the number of jobs we create.
2. What kind of jobs will be lost? Dangerous ones.
Across the American workforce, per 100,000 workers, there are 3.5 fatalities a year on the job.
Transportation workers? About 15 to 16. Truck drivers are more than 4X as likely to die on the job as the average worker and twice as likely as police officers or fire fighters. In most jobs they'll be safer.

Data on how dangerous jobs are here:
https://www.bls.gov/news.release/cfoi.t03.htm

Data on how many jobs are destroyed and created each quarter are here:
https://www.bls.gov/news.release/cewbd.nr0.htm

Now It's a Cult

In a Facebook conversation yesterday, I pointed out to a Trump supporter that believing Trump means that you have to discount the CIA, the NSA, the FBI, our courts, the media and scientists. For starters. His response was that I couldn't know who was right because I didn't actually see whatever it is that Trump is talking about this time.

This is how members of a cult talk. There is no objective reality that can be tested with observation or theories. There are no facts. Really, you have just two choices: either believe the leader or don't. You can be part of the conspiracy against him or you can be part of the group that supports him.