It's more interesting to write about how to make future progress than how to protect past progress but we don't always have that choice.


Apparently this blog closes down in August. I have not written a single post all of this month. I feel so very French.

I've written a fair bit about Trump when I would much rather write about the next economy. That will continue because Trump is such a big threat to progress.

WHAT IS PROGRESS?
As I wrote The Fourth Economy, I realized that I needed a definition of progress that worked from 1300 to 2050 - the period the book covers.  Progress couldn't just be conquering more land or manufacturing more goods or processing more information. It had to be bigger than that. The simple definition I adopted is that progress is an increase in autonomy. Autonomy means that an individual directs her own life. Power over gives way to power to, and the pope or monarch's power over the individual gives way to the individual's power to choose or define her own beliefs and policies and life. More goods to choose from means more autonomy. More data to inform a decision means more autonomy. All economic progress falls under the category of increases in autonomy.

Autonomy is the destination of and the means to progress. A rich man has more options about what to do with his weekend than does the poor man. A rich man can afford more education and investment to give himself more options in the future. Autonomy now can translate into more autonomy later. And it is not just about cash in one's pocket. Someone living in a place that respects religious freedom has more choices about what to do with his Sunday morning or Friday evening than a person living in a theocracy. When we make progress, we have more freedom about how to define and live a life and generally become more able to do that as a result.

HOW HAVE WE MADE PROGRESS?
In the first economy from 1300 to 1700, the individual gained autonomy in the realm of religion. Religious freedom meant that the no one could dictate to the individual what beliefs they held. It also meant that given a community could not impose supernatural beliefs upon people, so public affairs had to rely on the testable claims that eventually gave birth to the Enlightenment. Science that could be replicated and votes that could be counted became the basis for public practice rather than revelation of the elites about what God intended for communities.

In the second economy from 1700 to 1900, the individual gained autonomy in the realm of politics. No longer a subject of the monarch, individuals became citizens whose votes and dialogue shaped the policies that in turn shaped them.

In the third economy from 1900 to 2000, the individual gained autonomy in the realm of finance. By 2000, the individual had access to credit and investment markets that were largely reserved for elites in 1900. Not only did life expectancy increase from 47 to 77 in the US but so did the means to fund retirement in those advanced years, through social security, pensions, and 401(k)s. Additionally,  Keynesian policies and bank regulations subordinated individual banks to a central bank goal of low unemployment and inflation.

What do these shifts have in common? The institution in question - church, state, and bank - get defined as mere tools that can be - that should be - used by anyone. The church becomes a tool for the masses and each individual is free to use it or not as they wish (or even create their own church). The state becomes a tool for the citizenry and not the monarch. Bankers can - and rather spectacularly still do - pursue profits but within financial conditions that will be tweaked to keep inflation and unemployment within a certain range; banks and financial markets are meant to be tools for the masses, for the betterment of the whole economy and not just elite bankers.

This table captures one dimension of the Fourth Economy, this notion of institutions as tools. 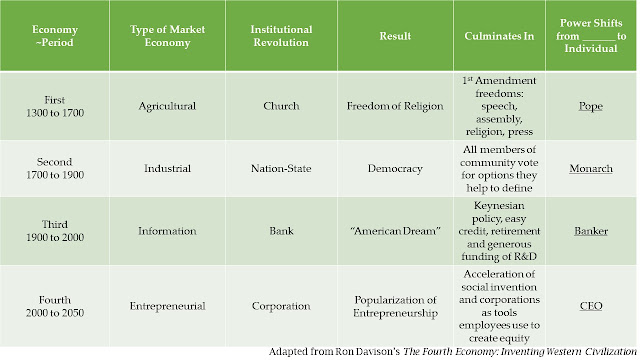 Given, that we have freedom of religion, democracy and Keynesian policies, we can now shift our focus to how we want to define the corporation.

Or so I thought.

THE CONVERSATION I THOUGHT WE WOULD BE HAVING
I thought that the 21st century would be a story of how we change the corporation to make it a tool for the average employee, the popularization of entrepreneurship resulting in - among other things - more employees using the corporation as a tool for creating wealth for other stakeholders and for themselves. Part of that vision is that within a corporation of, say, 100,000 employees there will about 1,000 employees so successful at creating wealth that they make the same as or more than the CEO. (This 1% number is roughly what we have in the US: about 1% of the population makes more than the $400,000 we pay our president. This is a sign that our nation-state is mature. As the corporation matures from a tool for the elites to a tool or the average employee, we should see a similar percentage of employees equal or beat their CEO's pay.)

I thought that we'd be focused on how to transform the corporation in this century. I was wrong.

TRUMP AS A SPEED BUMP ON THE PATH TO PROGRESS
As it turns out, the transition to the fourth economy has hit snags. Rather than a debate within the West about how to transform the corporation, we've got a president who challenges freedom of the press (a first economy issue), makes voting harder (a second economy issue) and challenges the Fed and banking regulations (a third economy issue).

Trump regularly calls the press the enemy of the people and warns evangelicals that a vote against him is a vote against "your religion." He constantly spouts nonsense, showing a disregard for anything vaguely resembling the truth, which might be the biggest first amendment threat of all. (One huge reason for freedom of thought is to allow the advance of good theories that crowd out bad theories in the form of superstition and conspiracy theories.) The GOP - in control of every branch of government - seems intent on making voting harder, not easier. They seem convinced that too many people are voting and that democracy has gone too far. Additionally, they still seem at odds with the gains of FDR's time and are trying to reverse  financial regulations meant to make finance safer for common people.

And yet we have a president who regularly attacks the press, the Fed, and even religion.

I had thought that at this point I would be mostly exploring ways to make the corporation a tool, how to transform work in a way that made employees more entrepreneurial, gave them more power to use the corporation to create their own lifestyles and wealth rather than be treated as tools for that corporation. This seems relevant as a means to address issues of stagnating wages and wealth and income inequality. That conversation seems to be on hold.

THE GOOD NEWS
The good news is that such disruptions to progress, such reversals, are common. Transitions into new economies are rough.

I still feel optimistic and intend to soon write a post on the inevitability of progress. The bad news is that over the course of history that plays out across four economies, a "short-term" blip can last a decade - or even generation.  If successful, Trump's attacks on freedom of religion, democracy, and our central bank will be costly.  For this reason the blog will continue to discuss the threat of Trump more than I would like.

It seems so very silly and unnecessary to re-litigate cases for democracy or freedom of religion or Keynesian policies that have already been so brilliantly argued through the history of the West and yet ....

Sometimes you are able to make progress. And sometimes you just do well just to protect what you already have. I'm looking forward to the time when we can again shift our focus to making progress into what we can't know rather than protecting what past generations have already proven.