There is a very real possibility that a father and his two sons will be presidents of this great country for two full decades (George H.'s 4 years plus George W.'s 8 plus Jeb's 8). Three men from one family to reach the top position in their field out of a nation of 300 million. It would be an unprecedented achievement for any family in any field, from entrepreneurship and pop music, to literature and science. 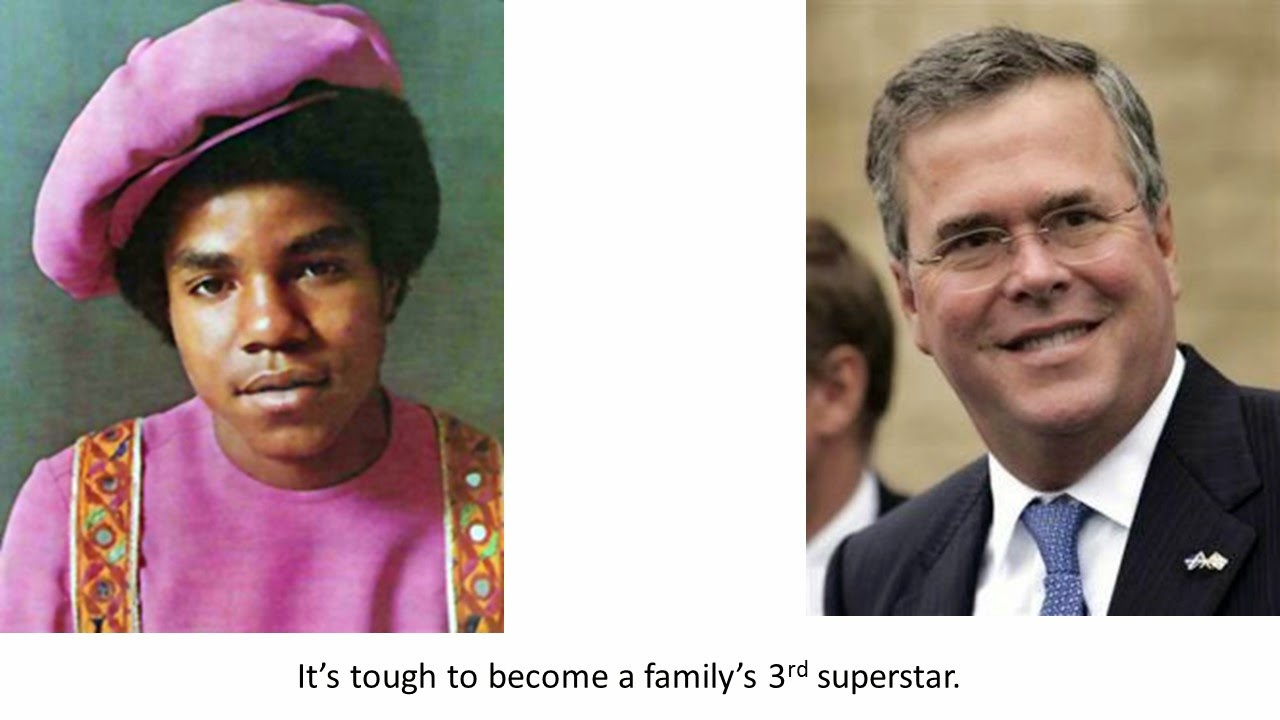 A Martian would be convinced that the Bush family must have some extraordinary mix of speaking ability, empathy, and policy genius to have so consistently won the hearts of the American people. It would be harder for mere earthlings to reach that conclusion.

You can hear Jeb Bush in his biggest speech yet, speaking to foreign policy here. I encourage you to listen for the full 35 seconds.

There is not a single utterance - or tongue stumble - that Jeb makes that is any different from those made by his brother. He's talking about foreign policy, about responding to the threat of terrorism. This is obviously a narrative about how to conduct ourselves in a post 9-11 world.

His conclusion? "We have no reason to apologize for our leadership."  This is probably the most frightening thing he uttered, suggesting as it does that either family pride, happy ignorance of actual events, or a stubborn denial has convinced him that there is nothing he would have done any differently than his brother.

Now you might believe that George W. simply had a string of bad luck. Possibly. It is also possible that the man who rightfully characterized himself as "the decider" made the worst series of decisions of any president in history.

His office was seeing a lot of communication in the summer of 2001 that Condi Rice - his National Security Adviser - categorized as "Osama bin Laden determined to strike in US." He decided to vacation at his ranch for the whole of August before 9-11.

15 of the 19 9-11 hijackers were from Saudi Arabia. Not one was from Afghanistan or Iraq. Bush decided to invade Afghanistan and Iraq.

Lawrence Lindsey was director of the National Economic Council when the invasion of Iraq began. Donald Rumsfeld estimated the Iraq war and occupation would cost $50 billion. Lindsey suggested it might cost $200 billion. Bush decided that Lindsey should be "forced to resign" and Rumsfeld should be trusted. So far, the attack and occupation of Iraq has cost about $2 trillion, 10X Lindsey's offensive estimate.

Never in the history of this amazing country has any president decided to finance a war with a tax cut. Well, not until George W. made that decision. Dubya inherited a budget surplus of $236 billion . The year he decided to invade Iraq with a tax cut, he created a deficit of $378 billion, a swing of  $614 billion from just three years earlier. By his last year in office, his annual deficit had grown another trillion dollars. From Clinton's last year to Bush's last year, the deficit grew by as much as Canada's entire GDP.  Only 10 of the world's 200-some countries have GDP larger than Canada.

Well it may have been expensive, but at least Iraq was worth it, right? It's hard to imagine how you'd argue that.

2,977 people were killed on 9-11. In the invasion and occupations of Afghanistan and Iraq, 6,717 service people have died and even that tragic number is only 4% of the 150,000 Iraqis who've been killed since our invasion.

We pumped enormous amounts of money, armaments, and military expertise into that area. ISIS is now well armed and has been able to tap into outrage to make that region a parody of Bush's vision of Iraq as a "beacon of hope." I'm not sure what data would support the claim that Iraq was a success.

Putting aside the fact that randomly pulling a professor from any American university's department of policy would yield someone more grounded in facts and sound theory than Jeb, it is enough to be alarmed that this man sees no reason to apologize for American (read, my brother's) foreign policy. All of these atrocious outcomes and THERE IS NOTHING TO LEARN HERE is the conclusion the man is hoping we will make. Given he can't admit that his big brother made a single mistake, he can't learn a thing from Dubya's disastrous administration. With no learning, there is no progress.

The Republican Party has been given an IQ test. If they choose Jeb, they will prove that they've  slipped from linkage to facts and theory into the realm of ideology. Ideologues don't deal in theories. They deal in unchanging principles. They don't learn and adapt. They persevere. They don't just reject evolution in theory. They reject it in practice.

The Republican Party emerged in the mid-1800s when the Whig Party died. If Republicans decide they are ideologues rather than pragmatists, if they nominate another Bush or someone like him, they will follow the path of the Whigs, dying out as the last of the baby boomers who so fondly remember Reagan die out. Curiously, this party that  is home to so many who resist science has a simple choice: evolve or die. That evolution starts with - if not an apology for past policies than at least a radical change in them. It is harder to imagine Jeb Bush leading this change than it is to imagine Tito Jackson becoming more famous than his siblings Michael and Janet.

The skills for innovation and entrepreneurship can overlap but they don't have to. By 1900, Andrew Carnegie was probably the richest man in the world. Carnegie's early success depended on a process patented by Henry Bessemer. Carnegie was a businessperson who knew how to solve new problems with strong, affordable steel that could be used to build skyscrapers and railroads. Steve Jobs did not invent the computer (although his partner Steve Wozniak did make some advances in circuit board design that helped to evolve it).

You could be innovative but not entrepreneurial. R&D labs are full of brilliant scientists who really could not tell you the commercial application of their efforts. And of course you can be entrepreneurial without being innovative. Starbucks original founders did not invent coffee roasting. McDonalds' Dick and Mac (fortunately for us, their most famous burger was named after Mac) did not invent the hamburger. The original founders of these companies were not even the ones who made the brands wildly successful. Ray Kroc and Howard Schulz have their names forever associated with McDonalds and Starbucks because they made them an international success and took the companies public.

There is a great deal of emphasis on STEM education - science, technology, engineering, and math majors. This is nice. It helps with innovation and we can always use more STEM graduates. They're probably the group least likely to be unemployed.

But even STEM graduates might not become innovators. They might not develop new technologies and products. That depends on particular sorts of institutions as varied as good grad schools, a strong financial community willing to bet on long-shots (venture capitalists, for instance) and strong R&D labs within universities and corporations.

And of course, those innovators may never become entrepreneurs. The skills required for product invention do not automatically lend themselves to entrepreneurship.

On that note, here is a fascinating chart that shows the gap between STEM and innovation. The gap between innovation and entrepreneurship is even wider. The policies that encourage each are very different but it's not obvious that policy makers make that distinction. 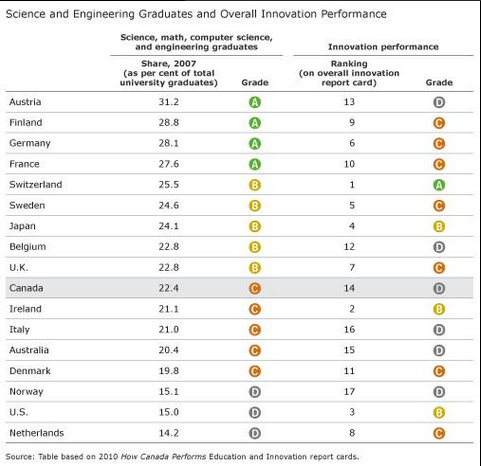