Age is Just a Number. Then Again, So Are the Votes You Need to Win

Our last four presidents were all baby boomers.

Clinton, Bush, and Trump were all born within a year of when Japan's surrender ended WWII. Fittingly, the impulsive Trump was born a mere 9.5 months after.

Obama gets lumped in with that generation by demographers but was born 16 years after WWII ended. Less boom than echo.

Clinton, Bush and Trump time traveled together, hitting all the major events at the same age.

It is not just that the 2020 candidates include what could be the first Jew, black, woman, black woman, or gay to be president. It also includes members of the silent generation, baby boomers, gen x, and a millennial. These candidates have hit major events at very different stages of life and would bring a very different perspective to them. Bernie Sanders was 4 when Japan surrendered and the horrors of World War II would have been relayed to him as fresh stories by family members when he was a little boy rather than as distant history as it would have been for Pete Buttigieg who will be younger when he's sworn in than Sanders was when Buttigieg was born.

Here is a way to think about the age of the candidates in terms of where they were when historic events happened. (And obviously for the candidates, the age when "sworn into office" assumes that they would actually win the 2020 election.)

Oh, and yes. I know that Ocasio-Cortez is too young but I thought it was interesting to put her there for comparison. And she's too young for 2020 but she'll be old enough by 4 months to run in 2024.
Written by Ron Davison No comments:

Trump the Roman Leader - Sacrifice is For Suckers

With Trump's on-going attack on dead John McCain last weekend one thing is clear: the GOP has officially become the anti-sacrifice party.

Trump's criticism of McCain for his failure to thank him for the funeral Trump "authorized" is another instance of Trump's lack of civility. It's worse than that, though.

I used to marvel that the GOP who readily called on soldiers to make the ultimate sacrifice of a life for the country were so outraged that they might be called on to pay 40% tax rate on income over $250,000 rather than 35%. "You're upset about sacrificing another 5% of your income over a quarter of a million but think it both natural and good to sacrifice a life for one's country?" I wondered.

Well, apparently the GOP heard that and decided that I was right. But they resolved that in a direction I hadn't predicted. They continue to believe that only suckers pay taxes and now also believe that only suckers go to war to be shot or captured. Accused of not paying taxes, Trump claimed "That makes me smart." Questioned about his criticism of John McCain, Trump said that McCain was not a hero. "I like people who weren't captured," he said, casually dismissing POWs as people we should respect.

Frans de Waal has written extensively about our closest relatives, the chimpanzees and bonobos. Terry Gross interviewed him recently and here's a fascinating excerpt about alpha males within chimpanzee communities. I suspect that group support for leaders in human societies is not that different.


The alpha male has many duties. ... A good alpha male breaks up fights and defends the underdog — not the winners, usually, but the losers. And the alpha male also is the consoler in chief, [who] goes to individuals after a fight to console the ones who have lost and sit with them and groom with them and hold them and things like that. And so the consoler-in-chief role is extremely important, and an alpha male who is good at that, he is also usually kept in power for longer.
In a chimpanzee society, [there are] always ... challengers to the top male. And it's almost as if the group is waiting [to see] if the male is a bully [or if] they don't like him. ... If it's a good alpha male who keeps order and is protective and is not abusive, then they try to keep that male in power.


And curiously, the chimps are considered violent in contrast to the bonobos and yet this matter of empathy is so crucial to their acceptance of leadership. In this sense, a chimp troop is probably more developed than is the US right now.

What has happened to the Republican Party under Trump? They have made official the position of contempt for sacrifice for others. Trump is less anti-Christ than pre-Christ, a man whose morality is very Roman. For him the question of morality is a question of what one can get away with, his sense of civic duty defined by a quest for power rather than any sense of service. Greed is good and sacrifice is for suckers.
Written by Ron Davison No comments:

I like Elizabeth Warren. Until she lapses into the reasons for raising taxes on the rich. "A government that caters to the rich is corrupt," she says.
I like certain friends who find Elizabeth Warren appalling. I like them until they get tight-lipped and talk about "You think it's right to take money from people who worked hard enough to get rich? That's wrong!"

But here is the thing: morality has nothing to do with tax and welfare policy. We tax people making $10 million a year at a higher rate because they have more money and we give aid to people making only $10,000 a year because they don't have enough. It's no more complicated than this. You don't have to make claims about how the poor are lazy or the rich are greedy or how the poor are so incredibly unfortunate in spite of their noble efforts or how the rich who are worth 10X as much put in 10X as much effort. You don't have to morally impugn or praise the folks who are in tails of the distribution of wealth and income. Their morality is no more an explanation of where they are in the distribution than is the location of folks in the middle.

But maybe politics depends on a sense of outrage at someone's greed or laziness to work.

One Thing I'm Looking for in a 2020 Candidate

It hit me that the candidate who could win me over in 2020 could do that with a promise to fund our public broadcasting at the same rate that the UK funds their BBC. So I looked it up.

Adjusted for GDP, the BBC gets 100x what the Corporation for Public Broadcasting gets. 100x.
Now I don't know the extent to which the CPB makes up total public budgets. ('m guessing it is closer to 50% than 5%, which suggests that the contrast between the UK and US is still stark but perhaps closer to 50x?).

I would be relieved - but surprised - to learn that the CPB budget is only a fraction of what we spend around the US for public TV and radio, which would make this contrast less jarring. Perhaps even make it comparable. That seems optimistic, though.

It would be great not to be subject to fundraisers or "sponsor mentions" that are essentially bad ads while listening to public radio. It would be nice if we took public broadcasting even half as seriously as the UK.

I find it helpful to tease through data just to calibrate perception. You may as well, so I'm sharing something I was teasing through this week.

Between 2000 and 2017, the number of Americans reporting income to social security (so this only includes wages), making more than
In 2017, 147,754 wage earners made more than a million. Studies suggest that there is a lot of turnover in this group, though, more people with one-off transactions (selling a business, for instance) than Manny Machado type contracts for that much money steadily paid over years.

What does this mean for a place like San Diego? Assuming San Diego's portion is the same as the average for the country (and I think that given San Diego's median household income is 24% higher than the national average, that's pretty conservative), San Diego city's population would have about

The social security data from which this comes is in current dollars, so does not adjust for inflation. That said, I don't think that people who reach one million in income in 2015 say, "Yeah but that is actually just $997,000 in 2014 dollars."

Change in Deficits From Reagan to Trump 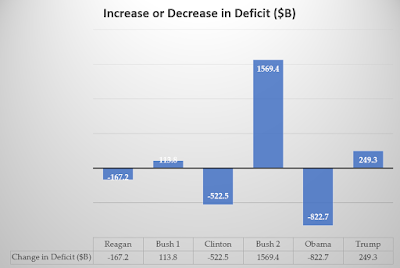 Reagan inherited a deficit of $419 billion and left George H. Bush a deficit of $252 billion. The deficit was $167.2 billion smaller by the time George took office, hence the -$167.2 in the graph above for the first bar.

Clinton turned this deficit into a surplus for his successor, reducing the deficit by half a trillion.

George W. Bush turned that surplus into the biggest deficit in history, a swing of nearly $1.6 trillion.

Obama whittled down the $1.4 trillion deficit he inherited into a still sizable $590 billion.

Trump is projected to increase that $590 billion into nearly $849 billion this year.

3 of the last 4 Republican presidents have increased the size of the deficit and both Democratic presidents have reduced it, suggesting that if you actually care about deficit reduction, you would not vote for Republicans. You can hate big deficits or love Republicans but you can't honestly do both.