Freedom of Religion as Bold, Liberating, Irrational and Key to Understanding the Debate About Abortion

TL/DR: Freedom of religion means that in spite of my conviction that you will spend an eternity in hell for not believing what I believe, I will respect your choice about what to believe. This respect for the beliefs of others has made the modern world vastly better than the medieval world. In the same way, respecting a woman's belief about "when it's a pregnancy" vs "when it's a baby" requires a similar restraint among true believers who know its a baby at the moment of conception, a similar awareness of the necessary gap between personal conviction and universal law.
In this modern world we rarely have occasion to think about what a bold, liberating and irrational thing is freedom of religion. Until you appreciate that, it’s hard to understand the modern debate on abortion.

Why is freedom of religion irrational? What is at stake is where souls will spend eternity: heaven or hell. If you know – I mean, really know – that your belief in the right god and way to worship will make the difference as to whether you suffer eternal damnation or eternal paradise, everything else pales in comparison. This life is so brief that no present sufferings are worth comparing. And if you truly loved your fellow man, you would never wish for them eternal damnation.

Odd things happen when you realize the stakes of a mistaken belief.

There is an account of good English Protestants kidnapping Irish Catholic children from their parents. Why? These poor children were to be indoctrinated into a Catholic faith that – because it was wrong – would result in their spending an eternity in hell. As an act of great kindness and compassion, they kidnapped these children to raise them as good Protestants, thus ensuring that they would spend an eternity in paradise. The trauma of mothers and children separated from one another was trivial given the stakes. “No present suffering …”

The 30 years war is another tragic example of the atrocities of war. And the consequences of not even having a concept of freedom of religion. For decades in the early 1600s Protestants and Catholics battled across central Europe, killing about 4 to 8 million people. In some regions, half the residents died. (As in any war, only a portion of the casualties were soldiers killed on a battlefield. And lest you think a few million insignificant, the equivalent portion killed in the US today would be about 70 million.) The aftermath of this madness was one of the catalysts behind our founding fathers determining that a core foundation to this country would be freedom of religion.
Religious belief was made a private matter in the US, not something you could impose on another or legislate, no matter how passionately convicted you were of how right you were or the stakes involved.
Again, freedom of religion is both the most wonderful and rational thing and the most awful and irrational thing. If you truly believe that your faith is the only one that will save a soul from eternal damnation, it is the most evil sort of thing to simply leave your neighbor to cling to mistaken beliefs that define Catholics or Jews or Scientologists or – gulp – atheists, or any number of mistaken beliefs. Seriously think about this. Eternity is at stake and you are going to let someone choose a path that means eternal damnation? And yet …
Freedom of religion required a kind of humility that had been lacking for centuries in the West. A humility of realizing that your neighbors’ beliefs were as legitimate as your own. You don’t even have to believe that they are right. You simply have to believe that they are deserving of the choice about what to believe as you are, recognizing that their convictions are as legitimate as your own. Again, you don’t even have to believe that they might be right. You might even believe that their passing on their belief to their children will also mean that those children are lost for eternity. You only have to believe that their belief they are right is as worthy of respect as your own.
Which brings me to abortion. The anti-abortion folks fiercely believe that at the moment of conception sperm and egg – the flotsam and jetsam of life, the regular waste of human existence – are transformed into precious life, into a little being as worthy of protection as a newborn. If you really believe that, it puts a burden on you as serious as the sincere belief that your faith means eternal paradise and their faith means eternal damnation. If you have real love, real care for this new life and its mother, you would never let anything happen to it. You would protect it as fiercely as if it were a child walking around in the world. These present sufferings of pregnancy and raising a child are not to be compared to murder in the same way that any present sufferings of this life pale in comparison to eternal damnation.
Similar to freedom of religion, though, to respect the choice a woman might make to act on her belief that the moment after conception sperm and egg are not instantaneously transformed into a child doesn’t even mean that you have to accept her belief. It simply means that you have to show her belief as much respect as your own. It requires a kind of humility about your own belief. And in this sense – this question of When life begins, we really are encroaching on the territory of freedom of religion. There is no observable fact that tells us the instant when life begins. That is a belief and as tends to happen with beliefs, there are differences in opinion – and conviction – about this.
You might say that given you know abortion kills hundreds of thousands of babies every year you can’t allow it to continue. You know this in the same way that good Catholics and Protestants in the 30 Year War knew that they would go to heaven and the others would suffer eternal damnation; you are utterly convicted of this belief even while knowing that there are people who believe otherwise. I’d remind you of the madness that followed from people in the West’s inability to respect the beliefs of others as just as valid as their own. No one is asking you to change your belief. We are only asking you to respect the beliefs of others just as much as you want your own beliefs respected.
From this freedom of religion, this freedom of thought, this freedom to compose a life of one’s own choosing has come a world that might well strike Europeans alive during the 30 years war as a kind of paradise. This present suffering has been dramatically reduced. The key foundation to building this present, free and comfortable world has been demanding as much respect for the beliefs of others as you would want for your own beliefs. You believe life begins at the moment of conception. Fine. We respect and honor that. No one is asking you to change that belief. We only ask that you show as much respect for another’s belief as you want shown for yours. You – rightfully – believe that it would be a horrific trauma to have an abortion forced upon you. Understand that a woman with different beliefs than your own would believe it a horrific trauma to have a pregnancy forced upon her. Whatever our differences in belief about the instant when life begins, we have the choice to believe that abortions and pregnancies are not something that should be forced upon a woman. Let people act on their beliefs. That respect is a cornerstone of the modern world and abandoning that respect adds to this present suffering in ways that are unnecessary and traumatic.
Dante and Virgil in Hell by Eugene Delacroix, 1822. 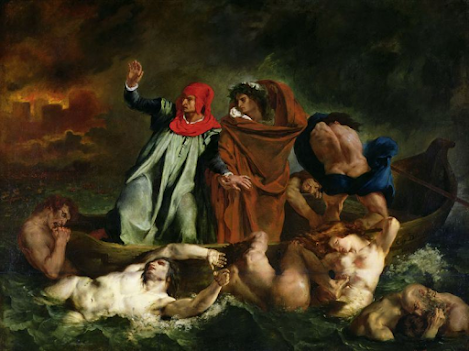